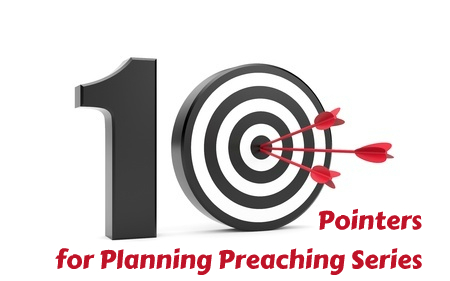 Earlier this year we looked at 10 pointers for planning a preaching calendar.  Let’s zero in and think about planning a series.

1. Keep track of your series. Having a record of what you have preached through as a church in the last years is very helpful in determining what to preach in the coming year.  If you have a record then you can see parts of the Bible that have lacked attention, for instance.

2. Make Bible books your default go to for a series.  There will be reasons to go to something different than a Bible book, but defaulting to a book is good practice for generating a healthy diet.  When I say book, I don’t mean necessarily exhausting a book – you could take a chunk in one series, and then return for another series at another time.

3. Be aware of the church calendar. A great series in Ezekiel will not feel so great the week before Christmas.  Be aware of Christmas and Easter, as well as other significant seasons in your context.  Plan series accordingly.

4. Seek to offer variety in biblical genre. A series in a Gospel will feel different than a series in an Epistle.  Old Testament history will be different again, as would a series in the Psalms or a Prophet. Try to vary the genre throughout the year so that you are not overloading the diet with one part of the Scriptures only.

5. Plan values-based series periodically. With a steady diet of Bible book exposition, you then have the luxury of sometimes taking two or three weeks to zero in on a specific value the church has, or to address a specific need in the church.  This series may be topically selected, as in, pick the best passages to achieve your goal (but then be sure to actually preach those passages!)

6. Schedule buffer weeks. When one series is followed immediately by another, there is no margin in the church calendar. Plan a spare week between series because things will come up.  Sometimes you will have to shift the series back a week, or maybe extend it to adjust from your original plans.  Buffers reduce stress in preaching schedules.

7. Plan your series with sensitivity to evangelistic events or guest Sundays.  If you know you will get guests at Easter, make the new series that starts the next week an attractive one to draw them back to church. That is much better than continuing an interrupted series that doesn’t sound appealing to newcomers.

8. Vary the length of your series. Make some of them 4-6 weeks, and maybe some 8-10 weeks.  Typically don’t go longer than that as they will inevitably get interrupted and start to feel protracted.  It does not matter how long Lloyd-Jones took to preach through Romans – it is not a competition and you are not him.

9. Vary the length of chunks within a series.  Don’t make a series monotonous by making every chunk the same length. Why not include an overview at the mid-point, the beginning and/or at the end?  Why not sometimes cover a larger section and sometime dwell longer in a couple of verses?  Andy Stanley rightly says that a lot of sermons would make a great series.  Don’t rush, but instead plan with enough room to linger in passages and benefit.

10. Be creative. As well as mixing the genre, varying the length of series and chunks within a series, you can also be creative on type of series: sometimes track a character (eg. Abraham’s faith journey in Genesis), or a theme (eg. the glory theme in John). Be creative in presentation – think about visual “theme branding” to give a sense of cohesion to the series. Be creative in what goes on around the series – perhaps a Q&A session would be helpful, or maybe an associated small group study, or maybe watching a movie based on that Bible book, or whatever.  Build a great series, and build great things around the series.

Well planned and well preached series can drive the life-changing impact of Bible books deep into the DNA of a local church!