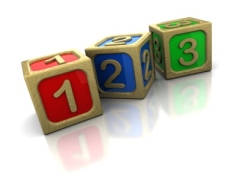 Last night I was chatting with my eldest about her maths homework.  As I looked at her workbook I recognized that eventually she will be doing things I can no longer do.  For a child there is a progression from basic numeracy, through addition, subtraction, multiplication, division, long division, etc.  I expect most parents can cope with these (except long division!)  But once the child is working through algebra, geometry, trigonometry and calculus, there is typically the crossing of a threshold in respect to what the parent can readily understand.

So what should the parent do at that point?  Hopefully you will start to see the relevance to this site here . . .

1. Become suspicious of the questions and insist that the child go back to basic numeracy.

2. Warn the child of the dangers of sophisticated mathematics and reassert that basic numeracy is all anyone ever needs.

Imagine the child decides they like the subject and wants to chase mathematics to degree level?  Uh oh.

Hang on, this makes no sense.  No parent that I know would function this way.  They would at least cheer the child on, and possibly put some effort in to understanding the subject again or for the first time.

So what do we do in church?  Let’s change the subject from mathematics to Christianity.  There is a progression.  Typically the progression is simple . . . (1) before age 11 tell lots of disconnected stories with a moral sting in the tail, (2) during teenage years speak about issues and hope the youth connect the issues to the disconnected stories, (3) watch them drift away in the sophisticated and heady world of university (if not before).

If a child is progressing to calculus in mathematics, won’t they also be asking very heavy questions in respect to life and faith and eternity?  Too often parents, youth leaders and even preachers, are scared by the good questions.  Too easily church people retreat into such nonsense as, “you shouldn’t ask questions like that, you will offend God!”  or “be careful with your questioning, it could lead you astray!”  And these unhelpful comments are sometimes topped off with thoughts like, “the Bible says it, that settles it, we don’t question it, blindly believe it!”  Throwing the same few proof texts at good questions will not achieve anything good.

Let’s prayerfully question the children’s and youth ministry in our churches.  Let’s prayerfully ponder the preaching in our churches.  Are we losing our younger folk by never engaging them properly?  Simplistic faith formulae may have worked for you, but they probably won’t for the next generation coming through.  If all they see is simplistic “blind faith” and never meet Christians willing to think, to study, to learn, to question, to ponder, to wrestle and to take God seriously, why shouldn’t they be drawn away when they meet a thinking, studying, learning, questioning, pondering, wrestling sophisticated atheist?

4 thoughts on “Losing our Youth by Dangerous Superficiality”