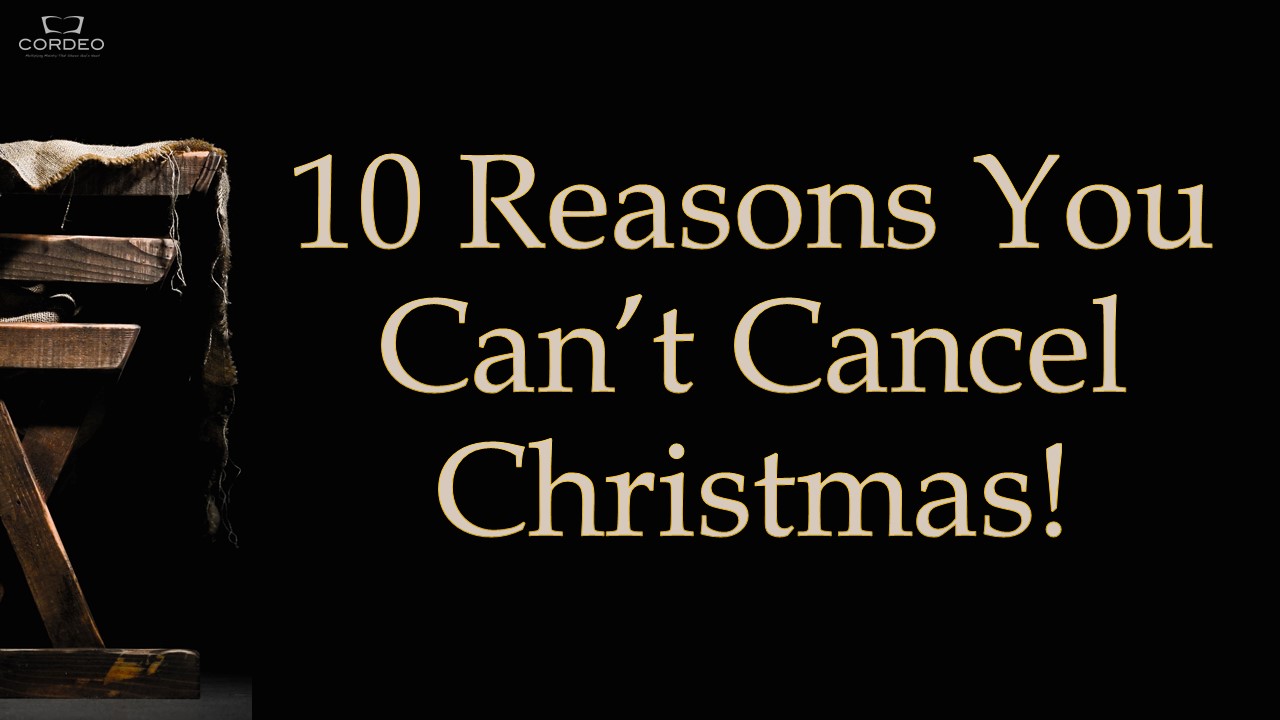 With everything that is swirling around in this turbulent winter, there are lots of rumours about Christmas 2020 being cancelled, curtailed, or at least more complicated.  Maybe you are trying to work out how to do church without the normal December schedule of carol services and special events. Maybe you are ordering all your presents online for the first time, or just wondering if you will be able to spend time with loved ones at all this year.

Even if Christmas could be cancelled, the Incarnation cannot.  And that is a reason to rejoice, whatever our circumstances.

Here are ten implications of the Incarnation – ten realities that cannot be cancelled, but must be celebrated in 2020 just as in every other year:

1. Revelation.  As the Christmas story draws to a close in Luke 2, we see Mary and Joseph bringing Jesus into the temple courts, where they encountered Simeon.  He took Jesus into his arms and declared that he was now ready to die, for he had seen God’s salvation, “a light for revelation to the Gentiles…” (Luke 2:29-32) Because Jesus had come, Simeon was ready to go.  Nothing could top that moment.  Let’s pray that the wonder of the revealing of God’s saving person and plan would shine bright in our hearts this winter.  We have Jesus; what more do we need?

2. Response.  Walking through Luke’s narrative will show us many realities to celebrate as we think about the Incarnation.  In Luke 1:13 we see Zechariah stunned at the sight of the angel standing beside the altar of incense in the temple:  “Your prayer has been heard…”  Maybe this was a prayer from years earlier, maybe even decades had passed since he had prayed about having a son, but God is a God who hears prayer and responds to it.  Let’s pray in the midst of dark times, confident that God hears prayer and responds to it.  That first Christmas demonstrates to us that God hears, God cares, and God is more than able to respond.

3. Invasion.  Zechariah was stunned to hear that his wife would be giving birth (a miracle!), and that their boy would have a key role to play in God’s plan (greater still!), because he would prepare the way for the Lord himself (the greatest news!!).  After centuries of silence from heaven, now this!  Not just an angelic visit.  Not just a miracle birth.  But the moment when the Lord himself would invade this world (see Luke 1:17).  Let’s pray that we would not miss the significance of the hinge of history – the moment when God the Son stepped into this world on his great eternal rescue mission!

4. Reign.  After Zechariah we see young Mary, startled by the angel bringing her the glorious notification.  In the midst of all he told her, we read these words: “the Lord God will give to him the throne . . . and of his kingdom there will be no end.” (Luke 1:32-33) The Son of God wasn’t just touching down for a brief incursion.  This invasion would lead to a kingdom, a kingdom that, unlike human governments, would not be temporary.  Let’s pray with confidence that our King is on the throne, and will be on the throne, forever.  The story of human empires rising and falling will conclude with one perfect human reigning over a kingdom that will never fall!

5. Union.  Mary was perplexed, but the angel soon explained that she, a human, would be overshadowed by the power of the Most High and so her child would be both human and divine.  She would give birth to the Son of God (Luke 1:35).  This is the middle link in a glorious chain – first the union of God with God (the Trinity), then the union of God with man in man (the Incarnation), which makes possible our glorious union of humanity with God in Christ (Union with Christ).  Let’s pray that we would live in the light of these three great unions – the blazing light of Christian truth in a dark and broken world.

6. Recognition.  Mary celebrated the wonder of God’s mercy toward her and to all who fear him in her famous song.  He who is mighty “had looked on the humble estate of his servant” (Luke 1:48). God is so high, and yet he recognises the realities of the smallest and weakest of his people.  Let’s pray in light of Mary’s celebration, because God recognizes the vulnerability we feel and the humility of our circumstances.

7. Remembrance.  Mary finished her song celebrating the big picture.  Long ago, God made promises to Abraham and the Patriarchs.  Thousands of years later, God kept his promises (Luke 1:55).  Our God is a God who makes promises and keeps them.  Let’s pray with confidence that God has a plan that he is working out in our world, and nothing will stop him from keeping his promises.

8. Redemption.  After John was born, Zechariah emerged from months of enforced silence to celebrate this great moment in salvation history.  He launched his song of celebration with “Blessed be the Lord God of Israel, for he has visited and redeemed his people…” (Luke 1:68) The invasion of God the Son into this world to set up his kingdom would involve a daring rescue mission.  He had to redeem his people, enslaved and trapped in this sin-stained dungeon of death.  Let’s praise God every day for the way he redeemed us, buying us back from death and bringing us to himself!

9. Illumination.  Zechariah’s final words in his great prophecy speak of the tender mercy of God that gives sunrise from on high – in this dark world, we so need the light that Christmas brought into our world.  We sit in darkness and the shadow of death, but the Incarnation gives light (Luke 1:78-79).  The world feels darker in 2020 than it has for many years, but let us pray that the light brought by the Incarnation would shine in our hearts and through us into a dark and dying world.

10. Peace.  As we step into the familiar territory of chapter 2, we find those shepherds sitting in the dark field as the angels burst into song praising God, “Glory to God in the highest, and on earth peace among those with whom he is pleased!”  So much has changed this year.  But nothing has changed.  God is worthy of all glory, and the peace that broke into our world back then is still just as real today, as we continue to live in anticipation of the total peace that only Jesus’ reign on Earth will bring.  Let’s pray that our hearts would be peaceful this winter, and that God would be glorified by more and more people coming to know what it means to be those with whom he is pleased!

Pleased to Dwell introduces the glorious biblical truth of the Incarnation.