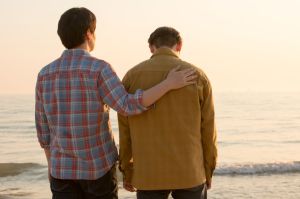 Earlier this year I heard a quote from JRR Tolkien.  After having the completed manuscript of The Lord of the Rings in his office for several years, he finally had it published.  Why?  Tolkien replied along these lines: “It would not have been finished, let alone published, if it were not for the simple encouragement of my good friend, CS Lewis.”

In Ephesians 4:25, Paul urges the believers to be truthful with one another, rather than living on in the falsehood that pervades our fallen world.  The community of God’s people are members of one another in a unique way, and so their mouths should be used to unify through the truth rather than the lie.  A few verses later, he returns to the subject of the mouth.  In verse 29 he urges them not to spray rottenness from their mouths, but rather to only speak words that build up and give grace.  Speaking the truth may be challenging, but building up takes it to a higher level again!

If this is true for believers in general, then how much more should we heed this as preachers.  Preacher, do you encourage?  It is strange to take note of how  encouragement is missing in a lot of preaching these days.

Exhortation is not the same as encouragement.  Yes, there is a need for exhortation, especially when the text calls the original hearers to action and that call remains applicable in the same way to our listeners today.  But exhortation tends to include persuasion with a dash of rebuke.  This may be needed, but it is not encouragement (with its recipe of hope, confidence and life).  Exhortation aims toward the listener, but tends to fire provocation rather than the relational fuel that we humans need in abundance.

Guilt is not the same as encouragement.  It really isn’t the same thing at all, just as a fish knife is not a butter knife.  It may seem like it will achieve the same goal, but generally it is sharper and more likely to provoke instinctive withdrawal rather than the desired goal.  Guilt dresses up as a shortcut to achieving conformity, but the results tend to be short-lived and shallow.  By all means pray for the Spirit to convict your listeners of guilt, He is very capable of that, but don’t go adding guilt into your primary repertoire – you will soon be slipping into legalism when you do.  Guilt aims at the listener, but it does so in an essentially negative way.

Enthusiasm is not the same as encouragement.  Yes, enthusiasm can indeed be contagious.  At the same time, it can merely impress others with your passoin while leaving them unencouraged in their own hearts.  Your enthusiasm does matter, but it is really a heartiness toward a subject or topic, rather than the life-giving heartiness toward your listeners that they need.

Application is not the same as encouragement.  By all means demonstrate how a biblical truth can translate into the nitty gritty situations of life.  People do need that to a certain extent.  But simply applying a text will point listeners to the steps they might take.  They also need heartfelt encouragement to feel warmed toward motivation in that direction.

Your words can urge, convict, enthuse, or offer clarification of application.  But let’s make sure our words build up, giving grace to those who hear, so that they feel our hearty encouragement.  They need it.  We all do.

Think back to someone who has been a real encouragement to you.  How did they do it?  Who can you offer encouragement to personally?  What about other people in ministry like you – is there another preacher or pastor that you can build up with some words today?

Perhaps before you preach again you need to look at the passage and ask yourself, “how is God encouraging me in this passage?”  Pass that on.