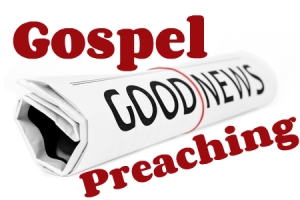 It might seem obvious, but evangelical ministry is about preaching the gospel.  Life transforming good news.  Surely everyone agrees at that basic level?  Apparently not.  There is significant debate swirling about what it means to preach the gospel, not only to unbelievers, but especially to believers.

There is generally a greater degree of consensus about preaching the gospel to unbelievers.  The gospel is the good news of God’s grace in Christ.  It is focused on Christ’s death and resurrection, and it calls for people not to work for salvation, but to trust.  By grace alone, through faith alone, in Christ alone.

At Pentecost Peter stood and preached a proclamation of what God had done in Christ and the culpability of those present in their rejection of Christ (*and another ingredient that apparently has now been removed from gospel discussions – more on that later).  The repent and believe element came in answer to their question of what they should do.

As you read on through Acts, the preaching of the gospel is repeatedly seen to be a declaration of who God is, what he has done in Christ, that Christ is raised and so on.  Repeatedly we read of sinners who turn, or repent, toward God.  It is a personal and relational turn from self or from rebellion against God or from idolatrous ignorance.  The repentance theme in Acts is not one associated with sinful behaviour and a turn to good behaviour.

Paul makes it clear in his epistles that his preaching ministry was one of heralding Christ and him crucified.  As he speaks of his preaching ministry he says a lot about his motives, his methods and his content.  He proclaimed Christ and him crucified.  He didn’t let his focus shift onto pressuring and controlling responses from his hearers, allowing God to generate the response rather than playing the role of ultimate persuader.  As he applied the gospel to the situations in the churches to which he wrote, Paul’s focus was explicitly on Christ (*and another ingredient that seems to have been removed from gospel discussions – more on that later).  The imperatives that flow out of the indicatives of gospel proclamation tend to describe what is expected of those “in Christ,” rather than an action list that loses sight of Christ as the focus shifts to self-determined effort and the hard graft of sanctification.