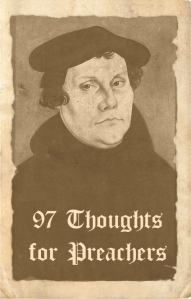 Luther’s 97 theses, for preachers. Give some thought to this one:

76. Every deed of the law without the grace of God appears good outwardly, but inwardly it is sin. This in opposition to the scholastics.

Was Jesus ever satisfied with external conformity? Or did Jesus go after the inner issues in the religious folks he spoke with? Strangely we can be tempted to settle for mere outward godliness in our churches. Why? Maybe because it is easier to pastor superficially? Thank God the Good Shepherd doesn’t pastor us this way.

77. The will is always averse to, and the hands inclined toward, the law of the Lord without the grace of God.

Amazingly, we are always going to be drawn by the lie of autonomy, of independence, even in respect to godliness. Instead of just speaking of others, let me ask us as preachers, do we ever lean toward good behavior in our own strength so that we can function with God at arms length?

78. The will which is inclined toward the law without the grace of God is so inclined by reason of its own advantage.

So are some people just more spiritually sensitive and “naturally” good? Not according to Luther. Unless God is at work, every one will be completely self-serving, however it may manifest itself.