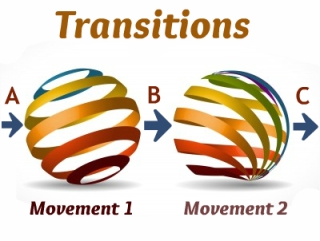 Last time I looked at the introductory transitions (A on the image).  What about a transition between two movements in a message?  This is the purest form of transition.

1. Slow down noticeably.  The sermon is an unsafe vehicle.  There are no seat belts or doors that guarantee your passengers will stay with you.  When you take a turn, make sure they are right there or you’ll leave them in the aftermath of the previous movement.  Slow down through the curves.  Listeners can seem like they are with you at a certain pace of delivery, and they might be able to stay with you in a straight line, but when you go in a new direction they may be unable to keep track and they will be left in a heap with dust settling around them.  Slow down.  Change pace.  Pause.  Make the transition clear.  Sometimes in our anxiety to press on and get through it all we can cut corners at this point (since it isn’t content at this point) and in doing so undermine the whole message.  If you must speed up, do so within a movement, not between them.

2. Look both ways.  That is to say, use the opportunity to provide both review and preview.  Where have we been so far?  Where are we going next?  Just a couple of sentences can make the world of difference.  It is the difference between an enjoyable ride in a nice car with a good driver, and an uncomfortable ride in an overpowered car with an overconfident teen at the wheel.

3. Mark physically.  Slowing down the delivery and reflecting / previewing are helpful.  But why not reinforce the shift in direction by a physical marker?  You could physically switch from one side of the lectern to the other (assuming you don’t hide behind it all the time), you could gesture appropriately, change you orientation by a few degrees, etc.  Subtle reinforcement in this way can communicate very effectively.

Notice that I haven’t suggested simply saying, “Now for my next point…”  If you have to, fine, but consider that this may have a soporific effect if the listeners don’t have confidence in you.  Good transitions should give a sense of momentum and progress.  Bad or patronizing ones can either lose people, or reinforce the sense of boredom.  Maybe a minute of your message will be taken up by this kind of transition . . . but this minute could be make or break!