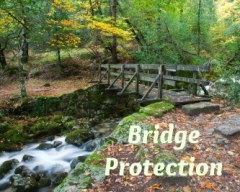 Debris and clutter under the wooden footbridge had clogged it up and water was streaming across the bridge. A minor inconvenience for dog walkers, or a gradual destruction of the bridge?  Pulling out the debris showed just how weak soaked and rotten wood could become, and without addressing the needs of the bridge, it too would rot to danger point.

So what are the debris issues clogging up the bridge we build in preaching?  What seemingly unimportant encumbrances are putting a strain on our messages and gradually leading us toward a rottenness that could undermine everything we do?  I don’t know which way you’d take the analogy, but here are some of the logs I see clogging up the bridges of preaching today:

1. Entertainment.  Good preaching should be engaging, and at times the biblical narrative is both gripping and entertaining.  But too easily we can start to think our role is to compete with the various entertainments of our culture, and consequently we undermine our own preaching.  Witty comments combined with powerpoint images will never compete with contemporary media banter and highly produced action.  We lose if we compete on entertainment alone, but we lose multiple times more in terms of what is sacrificed in the process.  The spiritual impact of the genuine preaching of a living Christ far outweighs anything our culture has invented to fill the void.  But if we pursue entertainment as an end in itself, our bridge will rot to danger point very quickly.

2. Political Correctness.  Like the proverbial fish that can’t see the water it is in, so we are so easily shaped by what our culture perceives to be “PC.”  My grandparents would come out with an absolute faux pas to my generation, but then be highly careful with a total non-issue (to my generation).  Too much focus on the current standard of what is acceptable will leave us dangerously weak in terms of the substance of the revelation that we preach.

3. Worship of Culture.  Every era has had its enticements.  The refinements of sophisticated living and liberal-leaning theology was a draw in the 1700’s.  Today some preachers are still drawn away by an inordinate enamoring of contemporary culture.  Don’t get me wrong.  We need to engage with culture, and we need to understand culture to engage people effectively.  But under the banner of cultural engagement it seems that some are so captivated by what attracts them that their gaze on Christ seems to fade and become something of a justifier of their interest in some aspect of contemporary culture.  Christ sanctifies their interests, and this seems to dangerously weaken their ministry.  Let’s not go to the opposite extreme of reclusive disengagement, but let’s remember that we are with Christ as He engages culture…we mustn’t disengage from Him in order to forge links on our own terms.

One thought on “Bridge Protection 2”