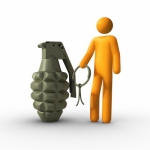 So yesterday I did the unthinkable.  I pulled the pin from a grenade in the sacred space where the notion of a memorable outline is revered as the chief end of preaching.  I suggested that people might not be best helped by a set of textual labels that typically lack applicational relevance.  I even suggested that people might not review what we have made so memorable!

As I wrote yesterday, if the text yields a clear and applicational sequence of thoughts, by all means preach that.  But I fear that in many cases a pre-commitment to paralleled alliterated points may undermine the following aspects of preaching:

1. Is the text being presented authentically?  If you are dissecting and squeezing the text into an outline form, you may well be doing it an injustice.  Very few texts are actually written as equal paralleled thoughts.  Don’t give people a clever outline at the expense of really opening up the inspired text.

2. Is the listener motivated to return to this text, and the rest of the Bible?  If they feel incapable of “finding the three points” in a passage, they are less likely to be opening their Bibles (which is what they really need on Thursday, not just a vague memory of three uninspired descriptive labels from Sunday).

3. Is energy poured into future recall being lost from present impact?  Would it be better to have them feel the full force of the text’s impact at the point of preaching, and then be motivated to read more later in the day and the next day, rather than striving to cram in uninspired labels as a memory aid to help them remember a message that may have been only somewhat impactful on Sunday?

4. Is the main idea being undermined by a commitment to a longer list of lower value statements?  If you put your energy into one carefully crafted applicational representation of the main idea of the text, that single sentence summary would be more memorable and reach further and make more of a difference than a set of well-stated points that reflect smaller segments within the text.  Let the whole strike home to the heart in a single thought.

5. Is the projection of the outline teaching listeners bad listening habits?  That is, are we communicating to them that the point of preaching is primarily education, that the goal of listening is recall and that the measure of spirituality is the taking of notes?  It’s weird, but when my wife opens her heart to me and speaks, I don’t reach for a pad and a pencil, I open my heart and I listen.